The technological transformation of Human Existence is obvious. Everywhere around the world we must interact and communicate, instantly. Recent, rapid and ongoing, this immediately conditions everyone as a New Society is formed.

Ten thousand years ago, in a brief ‘Axial Age’, this idea was an outrageous aspiration of those few who initiated a new operating programme. In a Neolithic Revolution organised to effect this end, a new way of ‘Thinking’ took its progressive control of ‘Living’ – as that programme irreversibly transformed a Primal Society.

Now, as a concluding consequence, Earth’s supportive resources are pressured towards a climate-change and potential exhaustion.

The Moon and Mars are being explored; plans are prepared to go hopefully forth to seek-out, explore and inhabit, other planets. All this and much more came suddenly – within my lifetime.

‘Our Time’ (this new ‘Axial Age’) is reactive as its ‘New Way of Thinking’ has come to dominate everything. Although it radically reconditions and controls a transforming existence, none so active have formally categorised and delineated this crucial event: this developing Blog will propose how that can be done.

Now organised as a spectacular metamorphosis of the Human Situation, these conditioning events are those as in ‘miracles’ of Nature’s origins and evolution.

As basic reorganising and Universal directing principles are put to effect, so our way of living is fundamentally changed – as any transmogrification from Egg to Caterpillar to Butterfly.

However, as a ‘rebirth’ in its temporary stasis such major reformation is inherently vulnerable to potential breakdown or failure. So Biomorphic origins or changes occur naturally within a protective womb, egg-casing or pupae.

The present technologically transformed condition was born from a world-time spent within such protective-formed ‘social enclosure’. That was one as ‘Classical Civilisation’ – formal rules and imposed patterns, procedures and regulations – as Neolithic-initiated in both Eastern and Western Hemispheres.

As previously, this cataclysmically inventive and creative change was long fomenting but instantly precipitated – born at a locus-point.

South Kensington hosted the World’s first ‘International Exhibition of Industry of all Nations’. It was enclosed in a ‘Crystal Palace’; that unique and spectacular structure astonished all comers invited from around the world.

1851, in London’s Hyde Park, a world transformation was constructed in that wondrous facility. Showcasing technologically advanced products, most were then new-formed – but some were most-ancient in designed elegance and practicality.

Soon, in consequential Exhibition Road Museums, Higher Education facilities, Arts and Crafts Schools and an Imperial College of Science and Technology a re-creative viewpoint was born that was internationally effective, until today.

Such engineered achievement precipitated an international effort of cross-cultural learning, invention and creativity. There soon followed a century-plus sequence of ‘World Fairs’ and ‘International Expositions’. As brought together and propagated in new environments, new forms and facilities fully and immediately reconditioned the World Order – facilitating two apocalyptic World Wars.

In Churchill’s phrase, “We shape our buildings – then they shape us”.

Ongoing consequences emanate from new environments; they come into us as a new ‘mind-set’ – a new way of thinking in conceiving and acting-out aspirations.

10,000 years ago, in that primary Axial Age, the invention of Architecture and Agriculture organised such a mental reconditioning. That endeavour set-out geometric-conditioning elements as essential to the construction of ‘Civilisation’.

“Classical” architecture’s now long-established civilising instruction has become effective almost everywhere – as a controlling mind-set that prevailed until the 20th-century.

Then 20th-century genius secured effective provenance of radicalism of every nature – outlining a New World Order.

Einstein and Picasso formulated their graphic visions of the New World Order – each respectively at the ‘speed-of-light’ in ‘Special Relativity’ and ‘Les Demoisells d’Avignon’.

All environments are evolutionary formed; diverging from one initial creation, thus interactive as mechanically organised material ‘computers’ wherein occupying organisms are responsive. Having generated accompanying neurological ‘programs’ this facilitates safe biomorphic access to World Conditions and the energies of existence all must depend-upon.

20th-century, humanity was committed to making new ‘Architectures’ to so set new supporting constructions and operating paradigms. Those are living-structures, so-shaped as the organising instructions we must now follow to continue inhabiting our World – or exploring a New Universe.

That ‘1851’ exposition’s architecture was dramatic – its luminosity has reshaped ‘us’ towards forming this ‘New World’ order. But the conditioning effect of a small element of the Kensington Show was unappreciated – so its outcome unpredicted.

Import of an ancient outlook from a crafted environment of 10,000 years ago seemed outrageously inappropriate to advancing a new engineered condition – or radically influencing any new technologically directed intellectual effort.

But then came a ‘new-viewpoint’ as shocking, from a yet feudal and isolationist Japan. There, the base-principles of Agriculture and Architecture were revered and refined, preserved as of their radical Neolithic origins,10,000 years previous.

That revelation was manifest in the traditionally constructed ‘House+Garden’. In its ‘Zen’ mindset of crafted wares and living accoutrements, geometrically conditioned ideals and aesthetic disciplines were shown most appropriate to a machined technology’s production of ‘Modern Living’.

Such unexpectedly presented quality of designed simplicity and crafted elegance shamed mass-produced crudity in the over-ornate forms of those Western-Industrialised Manufacturers.

Thus a restorative ‘Arts & Crafts Movement’ was born – in creative-design in the Victorian ‘Albertopolis’ of South Kensington.

That instant fusion of UK and Japan, two small islanded outlooks, challenged and changed the viewpoint of the Continental Civilisations. Those great Nations that seemingly had a ‘natural’ supremacy in their historically Globalised Conditionings.

Such strange and remarkable event was a mutual sympathy of an embracing outlook – of two ‘Outsiders’, each with ‘Stubborn Outlooks and Self-Confidant Pretensions’; UK so socially radical as had brought Van Gogh to England.

That ‘dual-intransigence’ yet conditions World-transformative events. As Oscar Wilde and Aubrey Beardsley, a ‘Yellow Book’ romance-affair was an ‘End of History’ – where ‘History’ was seen as the absolute global predominance of a ‘Continental Outlook’ expressed in innate ‘Classical Interests’.

So a non-classical mind-set came to conquer a Classical West then ensconced in revived traditionalism – its ‘Beaux-Arts’ set as a reaffirmation of its right-to-rule.

The other way – both Eastward and Westward to Japan – went machined industrialism, with fateful economic and geopolitical ambitions and consequences.

A Western oppositional development of world-transformative weaponry was soon to be Atomically demonstrated – employed towards immediate effecting a Globalised socio-politics as an ‘End of History’.

“Little Boy” – as the Atomic Bomb that Destroyed Hiroshima. 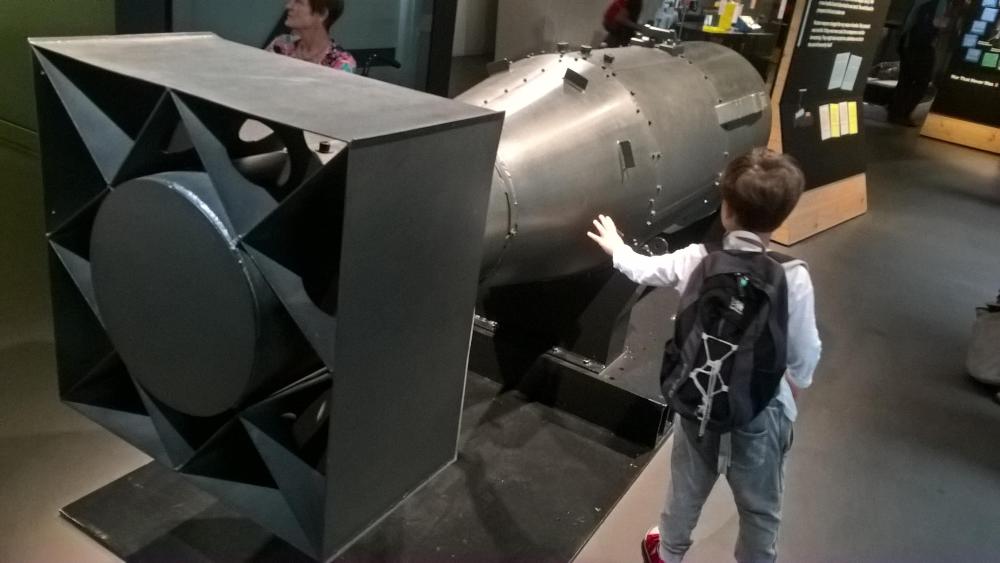